Sokobanja is one of Serbia’s most popular tourist destinations.
It is surrounded by the mountains Ozren, Devica, Janior, Rtanj, and Bukovik in the southern portion of the Sokobanja valley.
Sokobanja is bisected by the Moravica River.
Just 2 kilometers before entering the town, it becomes a canyon.
Near the Moravica Canyon, the ruins of the Roman and later medieval Serbian fortification Sokograd can still be seen.

The Moravica was famed for its crystal pure water and many crayfish.
The Politika newspaper reports on the crayfish export from Sokobanja in 1945, noting that “they were transported from Moravica by airplanes to Paris, London, and Monte Carlo.”
The Moravica’s artificial lake, Bovan, is about a 10-minute drive west of Sokobanja.

Sokobanja, a thermal and air spa, is one of Serbia’s most famous tourist destinations. Sokobanja, Soko-grad, doe mator, ode mlad was coined by Satirist Branislav Nui (“Sokobanja, Sokograd, you come old, you leave young”). He scribbled it on a postcard made by a friend in order to increase sales.
The catchphrase gained popularity after being published in the Politika newspaper on July 7, 1934, and has since been synonymous with Sokobanja, inspiring countless songs.\sSpa

Wooden foundations, bricks, mosaics, and spherical bathtubs are among the Roman thermae’s relics.
The Roman foundations were repurposed for the Turkish bath in the 16th century during the Ottoman period.
The Turks preserved the round shape of the pools, which are normally square in shape in hamams.
A dome with perforations is located above each pool and serves as natural ventilation.
An Ottoman defter dated 1560 references hammam renovations.
Samuel von Schmettau wrote about the marble baths in the 18th century.

Only 20 days after the town was liberated from the Ottomans, Serbian governing prince Milo Obrenovi assigned the first physician to the spa in 1833.
After migrating to Serbia, a surgeon named Georgije ore Novakovi, originally Leopold Ehrlich, a Jew from Galicia, converted to the Serbian Orthodox Church.
He was one of just three physicians in Serbia at the time, excluding the military ambulances.

In 1834, Prince Milo had the mineral waters of Sokobanja tested in Vienna, Austria, and the results proved the water’s beneficial medicinal properties.
On the invitation of the prince, German geologist August von Herder visited Sokobanja in 1835, where he saw thermal springs and mines.
He compared the waters to those of Bad Gastein, an Austrian spa.
At 1837, Prince Milo authorized the construction of a hospital (pitalj) in Sokobanja, with “20 rooms with floors” for guests, physicians, and workers at the Turkish bath (hammam).

Prince Milo approved an order for a sergeant major Lazarevi from the Kragujevac Military-police office to be transported to Sokobanja for healing therapy on June 21, 1837.
Today, this date is regarded as the beginning of Serbian spa tourism.
The Turkish bath was refurbished and expanded, and Austrian doctor Leopold Ehrlich was chosen as the first spa doctor.
The Prince frequented the spa and constructed numerous other structures, including the Prince Milo Fountain on the way to Aleksinac, Milo’ Konak in downtown Sokobanja, which is now a restaurant, and Milo’ bathtub in the hammam.
The prince’s bathtub, which, like the rest of the hammam complex, is still in use today, is short but deep, has its own tap, and is located in a separate chamber.
Other pools with hot water from underground springs include “male” and “female.”

The spa became popular among the artistic elite, and writers, poets, painters, sculptors, actors, and directors frequented it.
Apart from Nui, Jovan Cviji, Isidora Sekuli, Stevan Sremac, and Mea Selimovi paid a visit, while Nobel Laureate Ivo Andri drew a map of the town.
Andri relocated from Belgrade to Sokobanja in 1942 during World War II.
He first stayed at Villa Mon repos before moving to “Bota,” which is now part of the hospital complex.
During his stay in the spa, Andri finished the short story Snake and began composing some of his most important works, including the novels The Bridge on the Drina and Woman from Sarajevo, as well as the short story Jelena, the woman of my dreams, according to his diary.
Sokobanja and the villa were revisited “”I am afraid, this area will become famous,” Andri wrote in 1973.
The rest of the world will surge in, and I’ll have to flee and look for a new spa.
But where can I find such beauty and peace? “..

The Turkish bath in Sokobanja is the only one in eastern Serbia that is still operational.
It is protected by the state and designated as a cultural monument under the name Staro banjsko kupatilo (“Old spa bath”).
It’s also known as a Roman bath or a Turkish bath-Amam.
In 2002, the theatre was the scene for the “Serbian box office wonder,” Zona Zamfirova.
In 2005, the bathroom was remodeled.

Asthma, bronchitis, emphysema, respiratory infections, allergies in youngsters, cardiovascular diseases, rheumatism, neurological and gynecological ailments, physical and mental tiredness, and others are among the illnesses treated at the spa.

Sokograd is a town in Serbia.

Soko Grad (око рaд) was a medieval city and castle located 2 kilometers (1.2 miles) east of Sokobanja.
In 1982, the fortress was designated as a Cultural Monument of Great Importance, and it is now protected by the Republic of Serbia.

The stronghold dates back to the Roman and early Christian eras.

It was established in the 6th century during Emperor Justinian I’s reign to keep Pannonian Avars and Slavs out of the Balkan peninsula.
Stefan Nemanja occupied it in 1172, and it became part of the medieval Serbian state.
According to evidence, the fortress was razed during Stefan Nemanja’s reign as part of the Bogumil trial.

On the ruins of the Roman fort, the fort was restored and expanded in the late 13th and early 14th centuries.
Later, during the reign of Despot Stefan Lazarevi, it was mentioned.
It was conquered by the Ottoman Empire in 1398.
During the 1402–13 civil war, the Ottomans destroyed the town in 1413 in a battle between Musa elebi and the local Turkish lord Hamuz Beg.

The gate, walls, and three towers are the only visible remnants of the upper town today.

Another fort, Town of Vrmda (Vrmdanski grad), can be found 12 kilometers (7.5 miles) to the north in the town of Vrmda.
It was also a Roman stronghold that was built during Emperor Justinian I’s reign and was destroyed in 1413.

With the rise of tourism on the Rtanj mountain in the twenty-first century, the community was revitalized.
With the support of the village diaspora from the United States, Switzerland, and Italy, the villagers began to rejuvenate the items.
Some immigrants returned with their families, while others relocated their family to Vrmda and renovated nearly 40 homes.
The former school, which was established in 1851 and was in use until 1863 before being converted into the monastery’s konak, has been transformed into a museum.
There’s also a memorial to World War I troops and an intriguing medieval chapel.
Dating from the 13th century, it has only one room and frescoes on the ceiling. It was reconstructed and annexed in 1819. [7]

The locality is close to the former Tsarigrad Road, which connected Belgrade and Istanbul. Next to the road are two rocks, named Nikolina stena and Devojačka stena after the folk tales. The first one was named after a young man Nikola who slipped and got killed after trying to pick a flower for his girlfriend, while the other (“Girl’s”) was named after a girl who committed suicide by jumping of it so that she wouldn’t be ravaged by the Ottomans. There is also a Vrmdža Lake, old renovated watermill, wooden bridge over the Oravica stream, and a sawmill. [7]
Other features

Other attractions include swimming in the Moravica river and the Lake Bovan, which is especially popular among fishermen, galleries, museums, various concerts and festivities, hiking, wellness centers, hotels, aqua park, saunas, etc. Festivals include “Saint John the Herbs-picker” (in July; dedicated to the medicinal herbs picking on the surrounding mountains of Ozren, Rtanj, and Devica), “Green Heart Fest” (in July; the rock and house music festival) and “Marathon of the wishes” (in September). Since 1983, a “Golden hands” cooking festival has been held annually in July. Only the old, traditional local meals are prepared. Hiking is organized on the Ozren, Rtanj, Devica, and Bukovik mountains, while the popular excursion sites are the Sesalac cave, Očno, Kalinovica and Lepterija, known for the natural phenomenon, an apparent image of the Mother of God in the boulder. [4]

In the neighborhood of Gradašnica, on the river of the same name, there were 13 watermills, built from the early 19th century. They all went out of service by the 1960s. One of them has been renovated and became operational again, but only for the touristic purposes so that visitors can grind the cereals and knead dough themselves. On Ozren Mountain there is a large, single boulder in the middle of the vast meadow. It has been called the “Stone of love” as, allegedly, those who exchange kisses of vows sitting on the rock will stay together forever. According to the folk story, military commander and rebel Hajduk-Veljko and female hajduk Čučuk Stana, exchanged vows at this location. [4]

Special hospitals for lung diseases (Hospital for non-specific lung diseases, founded in 1978) and ophthalmology are situated on Ozren mountain, surrounded by the forest. The lung hospital is a legal successor of the original, 1837 hospital. [4] [5] The town center of Sokobanja is home to the 19th-century buildings of elementary school and Serbian Orthodox church.

In the village of Jošanica, 15 km (9.3 mi) to the northwest, there is a Church of the Dormition of the Mother of God. Founded in the 11th century, it is the oldest existing church in eastern Serbia. Closer to Sokobanja, on the Ozren mountain, there is a Jermenčić Monastery, founded in the 14th century by the Armenians who were fleeing the invading Ottomans. [8] Southeast of Sokobanja, on the slopes of Ozren, there is a seasonal Ripaljka waterfall. It exists only during the spring after the snow melts on the mountain. Already by May, it is usually dry. 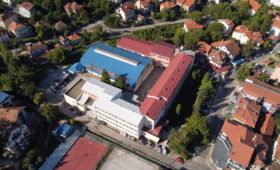 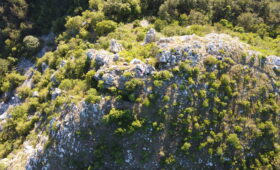 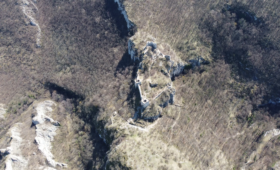